“It’s long past time for the Department of Education’s bank to clean up its act and start running the student loan program to benefit students, not private companies,” declared Sen. Elizabeth Warren on the floor of the U.S. Senate on Wednesday as she announced a plan (pdf) for the Department of Education (DOE) to completely overhaul its student loan servicing system.

Earlier this month, the Democrat from Massachusetts roundly condemned the DOE for putting the desires of the student loan industry over the needs of students, referring to a scandal in which the DOE protected one of the country’s largest loan companies (Navient, formerly known as Sallie Mae) from repercussions for defrauding U.S. service members.

Warren this week followed up that earlier critique with a detailed, five-point plan for reform.

“When a private company breaks the law and steals from American soldiers who are literally in the field fighting overseas, those companies should be held accountable,” Warren argued. “Everyone in government who is serious about standing up for the tens of millions of student loan borrowers in this country should embrace [these reforms].” 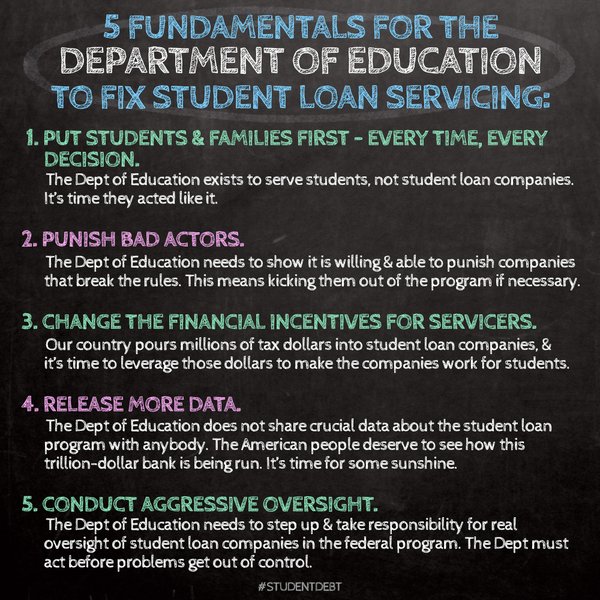 Warren’s plan recommends introducing debt counseling, clearer communication with borrowers, and an escalating complaint process. She tells the DOE to report bad actors to relevant government agencies, decries propping up “too big to fail” student loan companies, and advocates for introducing competition between the student loan giants such as Navient.

The plan also calls on the DOE to publish more data on the opaque federal loan servicing system to disclose to the public how it actually works, and asks the Department to step up aggressive oversight of the student loan industry.

“We shouldn’t be running the student loan program to create profits for private companies. We should run it for students,” Warren said.

The senator’s latest battle with the DOE over student loans was prompted by a report (pdf) last month that “found that the agency conducted a deeply flawed investigation of its student loan servicers’ companies like Navient, which collect borrowers’ monthly payments, and, knowingly misled the public about the findings,” “Common Dreams” reported.

“The Department of Education’s bank decided it was more important to protect Navient than to watch out for our military students,” Warren said. “One of the first things that must be done is a total reform of student loan servicing to make sure nothing like the Navient disaster ever, ever happens again.”

This work is licensed under a Creative Commons Attribution-Share Alike 3.0 License