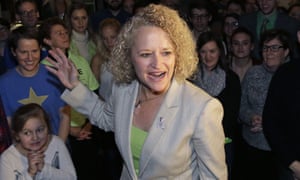 The former Utah state lawmaker Jackie Biskupski has become the first openly gay mayor of Salt Lake City’s capital of the conservative state where the Mormon church and a small town judge delivered setbacks last week to the LGBT community.

Official election results showed Biskupski won 52% of the votes to defeat two-term incumbent Ralph Becker. The victory by Biskupski marked a milestone for LGBT people in Utah who have made major strides in recent years.

“Today is not just about making history,” Biskupski said.  “It is about people. It is about effecting change.”

Her supporters cheered when the results were read. Becker showed no reaction but later congratulated Biskupski and vowed to work with her to ensure a smooth transition.

“Serving as mayor of Salt Lake City has been the richest working experience of my life” Becker told reporters. “It has been an unparalleled privilege and honor to serve in this role for eight years.”

Biskupski takes over after progress on gay rights was temporarily marred in recent weeks when a judge ordered a foster child to be removed from a lesbian couple and placed with a heterosexual couple. The judge cited the child’s wellbeing as the reason for his order.

The ruling set off a firestorm around the state and nation. The judge then reversed his decision and took himself off the case.

Biskupski is not a member of the Church of Jesus Christ of Latter-day Saints and said she hoped the faith would reconsider the policy. She said one of her goals as mayor was to meet with church leaders and discuss the new rules.

Salt Lake City is a liberal island in the state where no Republican has been elected mayor in four decades. Gay rights group Equality Utah endorsed both Becker and Biskupski.

Becker has been called an ally of the LGBT community, helping pass a 2009 city anti-discrimination ordinance. He also officiated at dozens of the first gay marriages in 2013 in the hours after a surprising ruling overturned Utah’s same-sex marriage ban.

He and his husband, Moudi Sbeity, were one of three couples who sued to overturn the state’s same-sex marriage ban.