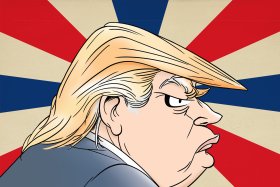 Here’s the thing: this isn’t just Trump doing this. The Republican-controlled House and Senate passed those two bills, and the Republicans have been fighting that fiduciary rule tooth and nail.

It’s not just Trump, Republicans as a party are using Trump to engage in a general assault on protections from corruption, pollution, corporate fraud and financial scams.

This is who they are.

“We Just Need A President To Sign This Stuff”

This is not just Trump. What we are seeing happening to our government is the end result of a decades-long effort by the corporate-and-billionaire-funded “conservative movement” to capture the Republican party, and through them to capture the country — for profit. And here we are.

No, they are not. They like it that he’s squatting in the Oval Office.

Grover Norquist, one of the key leaders and strategists of the conservative movement, worded it clearly and succinctly, “We just need a President to sign this stuff.” “Pick a Republican with enough working digits to handle a pen to become President of the United States.”

After waiting eight years, (yes, they waited that long), the Obama administration finally put a rule in place to protect “streams, fish, wildlife, and related environmental values from the adverse impacts of surface coal mining operations.”

The stream protection rule requires the restoration of the physical form, hydrologic function, and ecological function of the segment of a perennial or intermittent stream that a permittee mines through. Additionally, it requires that the postmining surface configuration of the reclaimed minesite include a drainage pattern, including ephemeral streams, similar to the premining drainage pattern, with exceptions for stability, topographical changes, fish and wildlife habitat, etc. The rule also, requires the establishment of a 100-foot-wide streamside vegetative corridor of native species (including riparian species, when appropriate) along each bank of any restored or permanently-diverted perennial, intermittent, or ephemeral stream.

Sounds great right? Well protecting the environment and protecting people costs money that would otherwise go into the pockets of executives of and investors in coal companies, so…uh uh.

By the way, the rule would have created at least as many jobs as it might have “cost.”

Saying, “We’re bringing back jobs big league,” Trump signed a bill repealing a Securities and Exchange Commission (SEC) rule written under the 2010 Dodd-Frank financial reform law. The rule required oil companies to disclose if they are bribing dictators who steal form their country.

The Hill reports on this, in Trump signs repeal of transparency rule for oil companies,

The legislation is the first time in 16 years that the Congressional Review Act (CRA) has been used to repeal a regulation, and only the second time in the two decades that act has been law.

…[The CRA] was meant to fight corruption in resource-rich countries by mandating that companies on United States stock exchanges disclose the royalties and other payments that oil, natural gas, coal and mineral companies make to governments.

THIS was the priority of the Republican congress.

These scams siphon an estimated $17 billion a year from the retirement accounts of working people.

The Labor Department announced sweeping rules Wednesday that could transform the financial advice given to people saving for retirement by requiring brokers and advisers to put their clients’ interests first.

The long-awaited “fiduciary rule” would create a new standard for brokers and advisers that is stricter than current regulations, which only require that brokers recommend products that are “suitable,” even if it may not be the investor’s best option.

For obvious reasons ($17 billion swiped from working people each year) Wall Streeters didn’t like the new rule one bit. They put a ton of money into killing it. And now Trump is gutting the rule.

This is the classic way people get fucked by a rigged system. Trump is giving Wall Street the freedom to go back to screwing people.

Here is the Google link to a fact sheet on the rule. Click it to see how your government works for you in the Trump era: Fact Sheet: DOL Finalizes Rule to Address Conflicts of Interest …www.dol.gov/ebsa/newsroom/fs-conflict-of-interest.html

This Is Who They Are

Up next on the agenda is gutting the Consumer Financial Protection Bureau. The government agency’s name sort of says it all, doesn’t it? Of course Wall Street and the Republican Party want it gone.

The chairman of the House Financial Services Committee will move forward on legislation to neuter the Consumer Financial Protection Bureau and its power to crack down on predatory business practices, according to a leaked memo that emerged on Thursday and infuriated Democratic defenders of the bureau.

What else is there to say? This is who they are.