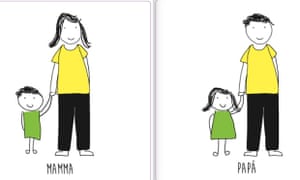 A plan to to challenge young children’s ideas about gender through play at schools in northern Italy – including with a memory game that contains images of male homemakers and female plumbers – has created a storm of protest, with some politicians saying the effort will confuse children about their sexual identity.

The programme – titled Game of Respect – is aimed at children aged three to six in 45 schools in the Trieste region and involves educating teachers about how to use games and role-playing to teach gender equality.

Part of the kit given to teachers is Memory, the classic matching game, which includes images of male teachers, female chefs, female firefighters and a man pushing a pram.

Another game uses images of an elephant – on a skateboard, with a briefcase, with children, cooking – to promote questions and dialogue with children about whether they believe it is a male or female elephant that is engaged in the activity. The programme urges teachers to observe the use of certain colours in the classroom that are traditionally geared in a gender-specific way, and how many toys are used – such as strollers and cosmetics – that also adhere to gender stereotypes.

“Very often boys think about typical boy jobs while girls think about other typical work or aptitudes, so this play is aimed at making them understand that, if you are a man, you can use an iron at home, and if you are a woman, you can be an aeroplane pilot,” says Antonella Grim, an education official on the city council in Trieste, who supports the programme.

“It is not about sexual attitudes. It is about roles in society and stereotypes,” she said.

Grim said the programme had not yet been rolled out. Instead, teachers in select schools were attending voluntary training sessions to become versed in the games. Next, the plan will be presented to parents.

The most serious obstacles to the programme may be political, however, with officials from the rightwing Northern League party and Forza Italia, Silvio Berlusconi’s conservative party, voicing strong objections. According to reports, plans for children to play dressup in costumes that defy gender stereotypes have caused the most uproar.

Barbara Zilli, the regional director of the Northern League, called for the immediate suspension of the programme, saying in a statement that it was “likely to create confusion with respect to the sexual identity of children” and that it was an “underhanded attempt to manipulate the psyche” of young children with “deliberately ambiguous” messages.

“It is legitimate and understandable that schools be taught not to discriminate against gays and other minorities, but this does not necessarily entail the imposition of a model of society that provides for the elimination of the natural differences between the sexes,” she said.

Sandra Savino, of Forza Italia, said the plan had no “pedagogical function” and that the correct place to examine gender differences was within the family.

But not all local politicians oppose the programme. Some members of the Democratic party and the anti-establishment Five Star Movement have expressed their support.

“Objections to the programme come from fundamentalist Catholic preconceptions that increase intolerance without considering the educational needs of children and the need to give them instruments to serenely face diversity,” a Five Star Movement spokesman told Il Piccolo, a Trieste newspaper.

“The gender gap is one of the major problems of our country, due to lack of development of the whole society: to overcome it we must remove the structural causes,” said Fabiana Martini, the deputy mayor in Trieste. “These reactions show that there is still much work to be done and that there really is need for the Game of Respect.”